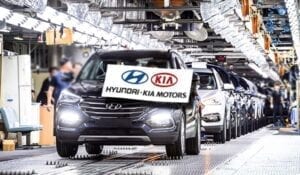 South Korea’s largest automaker Hyundai Motor Co. and its sibling Kia Motors Corp. made big strides in India as they kept up record-breaking monthly sales in October on robust demand for customized models for the hugely populated market.

According to Hyundai Motor Group on Tuesday, Hyundai Motor sold monthly-high 56,605 cars last month in India, up 13.2 percent from a year ago. It broke the previous record high of 52,001 units in two years.

Hyundai Motor’s newest Creta compact SUV and Grand i10 hatchback sold more than 14,000 units, each, driving its overall sales in India. Creta, the first strategic model for India, was released in June 2015 and then named Car of the Year in 2016. The latest second-generation Creta also received warm response, with cumulative orders topping 55,000 units in just four months since its launch.

Sales of Kia Motors cars also jumped to the monthly record of 21,021 units last month in India after gaining 63.5 percent from the previous year. It produces Seltos compact SUV at its Anantapur plant and recently added Carnival MPV and Sonet to the production list of the plant. The Sonet, which was released on Sep. 18, achieved a 10,000-unit milestone in monthly sales, putting its name on the October top 10 best-selling cars list with Creta and Grand i10 in India.

India is among the hardest hit automotive markets by Covid-19, with April auto sales plunging to near-zero level. Hyundai and Kia saw a sharp fall in sales in April and May but started rebounding in July.

Their market share was pushed up to No. 2 and No. 4 – Hyundai Motor 16.9 percent and Kia Motors 6.3 percent. The duo’s cumulative share from January to October amounted to a combined 23.2 percent, which means nearly one out of five cars sold this year in India are Hyundai or Kia vehicles.

Hyundai Motor Group now is preparing for a pickup in other major overseas markets with its luxury brand Genesis’ second SUV model GV70 due to be out in the end of the year.

“The 2022 GV70 threads a delicate path between being overstyled and eye-catching, and we think it does so well,” said U.S. automotive journal Motor Trend, adding that the GV70’s five-sided grille looks “better integrated” than on the larger G90 sedan.

By Park Yun-gu and Lee Ha-yeon

BUYCARKOREA is your best partner in purchasing vehicle directly from Korea This is the perfect and the safest way to buy vehicle directly. There is new offers every day, wide range of services. You can not only buy but repair, customize, put accessories and order spare parts.
Category: Motors,
Share this