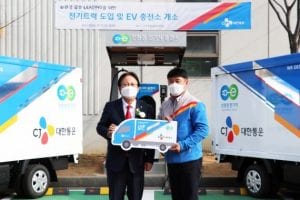 CJ Logistics said Wednesday it will introduce electric trucks to replace its diesel vehicles, for the first time in the Korean logistics industry.

Marking the introduction of the electric vehicles, CJ Logistics held an opening ceremony of the first EV charging station in Gunpo on Tuesday.

While there have been cases where logistics companies test operated electric trucks, modified from the existing models, it is the first time to actually commercialize the use, the company said.

”Marking this year, which is the 90th anniversary of CJ Logistics, we will replace all of the diesel trucks with EVs by 2030,“ Park Keun-hee, the vice chairman of CJ Logistics said.

CJ installed one EV charging station in Gunpo and two in Ulsan for the trucks, and they are also made available with payments for other drivers.

The electric truck planned for operation can drive up to 180 kilometers at a single charge, and the cars can be fully charged in an hour, CJ Logistics said.

The driving range is enough for now, as the electric trucks departing from the Gunpo terminal deliver to Anyang in the same province, which is about 50 kilometers of daily driving average, the company added.