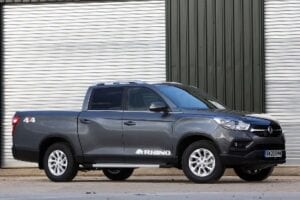 Its maker is carrying on as normal, the importer for European markets continues to sell the brand’s models and dealers are operating: despite receivership, SsangYong is very much alive and kicking. The Musso Longbed, now available in Britain, is also the marque’s biggest vehicle yet.

While we wait to hear what Korea Development Bank and Mahindra &amp; Mahindra plan to do with SsangYong Motor, it’s business as usual for the Korean company during the current three-month break from debt repayments.

According to South Korean law, bankruptcy doesn’t happen until options whilst in receivership are exhausted. M&amp;M has a 74.65% holding in the company. The India-based conglomerate insists it will not inject fresh funds but will instead seek to bring in a new majority owner, which may or may not be the California-based HAAH Automotive Holdings, by the end of February.

After a brief hiatus following the defaulted debt payment, production of all models, including the Musso Longbed, restarted at the Pyeongtaek plant during the second half of December.

Obviously last month wasn’t ever going to be a strong one in South Korea, yet a fall in sales of 20% to 8,449 wasn’t bad at all considering everything that had been happening with the company and its brand image. SsangYong somehow even managed to stay ahead of fifth placed Samsung in December and ended the year with total deliveries of 87,708. Worldwide sales fell by 19% to 107,324 units from 132,799 a year earlier.

Here in Britain, Bassadone Automotive Group, which has the concession for the UK market, had until recently been busy adding dealers (as well as losing others). BAG was also in discussions with Mitsubishi Corporation concerning a possible acquisition of certain parts of The Colt Car Company’s UK operations. But on 15 December, BAG told us that MC had pulled out of the talks. So now it’s back to the business of importing and distributing SsangYongs under what must be extremely testing circumstances.

Until Covid saw showrooms closed, the brand had been having quite a good 2020 and in fact, despite all that happened last year, SsangYong didn’t perform too badly. Sales were down by 25% to 1,894 (2,509 in 2019) of which the Musso made up 422 units. That includes vehicles classified as both passenger cars and light commercials.

It’s not surprising that in common with other makes, there are no projections for 2021, but fresh vehicles are coming, including the facelift for the Rexton announced for the Korean market in November.

The media launch of the extended Musso had to be cancelled (twice), which is why some readers may not know that this variant is available in Britain. There are three model grades for the standard length trucks, these being in order of pricing, EX, Rebel and Saracen. The Longbed sits at the top of the line-up, not only in size but pricing too, available solely in a high-spec Rhino trim level.

The local concession boasts that both standard and long variants can tow up to 3.5 tonnes whilst also carrying a one tonne load in the tray (1,095 or 1,140 kg). That bed is longer than in other Mussos and the wheelbase is also lengthier: 3,210 mm compared to 3,100. A fitted load liner comes as standard, along with a 12V/120W power outlet and rotating hooks to secure tools/equipment.

<strong>Number one pick-up for load capacity</strong>

For those who are looking for best-in-class towing ability, the choices in gross train weight are an impressive 6,450 kg (manual), 6,750 kg (automatic) or even 6,900 kg (Rhino). Those numbers mean the Musso has the highest total load capacity of any pick-up sold in Britain.

The strength of the chassis and torque of the diesel engine might be unchallenged yet the vehicle’s sheer size can present the occasional parking challenge. Anyone thinking of buying a Longbed needs to make sure it won’t be sticking out of their garage as not all UK houses – or even off-road parking spaces – can cope with a 5,405 mm vehicle. The narrow and tightly packed bays of supermarkets can present another challenge – best to park away from most other cars as you can block traffic flow.

All variants have four full-size doors and there’s a good amount of space both up front and for three people in the back, the only downside being no place to leave personal belongings either out of sight or locked in the loadbay. An extra-cost tonneau cover would solve that though and I was surprised that even the top-spec Rhino test vehicle didn’t have that.

A week and a bit driving the Longbed Rhino had me rating it just about perfect for the conditions. If roads are slippery, high range 4×4 is easy enough to engage, this being done via a dial beside the handbrake. You can also select 4L, with the default being rear-drive.

The lack of a load in the tray can mean one or both back tyres will spin even with a light foot on the throttle on a wet driveway if it’s inclined and gravel like mine is. Starting in 4H solves that.

Yes it’s big but I didn’t find the width to be an issue as it would be in something like a VW Amarok. The diesel engine has masses of torque, the automatic gearbox smooths out any turbo surge and there’s even – surprisingly – a not unappealing exhaust note.

Something which can’t be disguised, even by that long wheelbase, is the ladder frame chassis’ inherent default to rugged rather than super-smooth ride.

The Musso LWB jitters over rough road surfaces but at least it never bangs and roadholding is actually really good; it can take a little while to get used to how much the thing will lean though. Yet like most Land Rovers, once you accept that, the Musso can be properly engaging to drive at, say, seven tenths of its limits. Above that, at least in the wintry conditions which defined my time with the car, it’s best not to push things and risk loss of composure.

Something which all SsangYongs have in common is value for money. It’s just a pity that more people don’t know the brand’s vehicles, and that includes the seven-year warranty. Even if the new Musso might be too lengthy for some, it’s ideal for those whose priorities are a high quality interior with all the latest technology, allied to maximum towing and load capacity. It’s also good to be driving a vehicle which you know is a bit like how a Subaru or an Isuzu is Britain: you don’t see many but the people who buy them know how long-lasting they are.

Revealed three years ago this month in South Korea as the Rexton Sports, the standard pick-up was joined by the long body in January 2019, the second of the duo taking just over 18 months to reach the UK. Both Q200 and Q200L are, like all SsangYongs, manufactured at the company’s Pyeongtaek plant.

The Musso was also supposed to be assembled in partnership with Saudi National Automobiles Mfg (SNAM) from later this year but that will inevitably be on hold until SsangYong’s main bank and Mahindra &amp; Mahindra work out a way forward over the outstanding debt repayments which fell due last year.

BUYCARKOREA is your best partner in purchasing vehicle directly from Korea This is the perfect and the safest way to buy vehicle directly. There is new offers every day, wide range of services. You can not only buy but repair, customize, put accessories and order spare parts.